A guest post from Daryl Lisa Fazio, lyricist and librettist of this year’s show lift, written with Aaron McAllister.

My writing partner, Aaron, and I didn’t start out being 800 miles away. This whole life-changing thing began on the same hallway at a university where we were both new faculty. And when I was suffering through mounds of grading, despite several determined layers of concrete block, I could hear his baby grand. Which made everything better. As music does.

And I said I was a playwright, and he said he was a composer, and we both said we’d always wanted to write a musical. And we laughed a lot. And life suddenly got a lot more interesting. As life does. 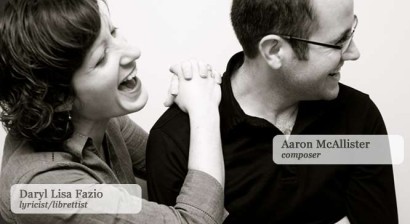 That was almost ten years ago now. Years of jobs ago. Marriages and births and deaths ago. And three-and-a-half musical collaborations ago.

The first collaboration was lift. We wrote the initial draft together, on that hallway. Fast. Kind of deliriously. And since going our separate directions for jobs and family, we’ve rewritten it and rewritten it and rewritten together. But many miles apart. Less deliriously. But with an objectivity that comes from both distance and time. And a confidence that comes from a partnership rooted in trust, respect, and a heck of a lot of shared jokes. It’s probably no coincidence that all of these things are essences of lift too, as it’s grown—family, connection, loss, change, a new normal, and hanging onto humor in the midst of it.

Usually, I do my thing first. Book scenes, lyrics. Then I ship it off to Aaron, who has an uncanny knack for matching musical tone to words without hand-holding. If at any point, I realize something needs an overhaul, sometimes I warn Aaron beforehand. Sometimes I don’t. I follow the story, the characters. They’re the boss. Then this happens: “Aaron, I rewrote 75% of the lyrics to [insert song title here]. It’s so much better because now it’s doing what the scene alone couldn’t. Oh, and, um, it’s half as long. And it’s not a ballad anymore. And it’s a duet.” And from Aaron I get…well, maybe only cricket sounds at first. Then probably a withering wisecrack. Then. He gets to work. And he writes a better song from the better words. And he plays it for me on the phone or sends me an MP3 at 1am. And we say, boy, we just keep getting better and better at this. And there’s probably more laughing.

You may be sensing a theme.

The day Branden Huldeen called me to say lift had been selected for NAMT’s Festival this year, I couldn’t dial Aaron fast enough. And we talked on top of each other. And our voices shook with adrenaline. And then there was a pause. And then, yes, laughing. And then: we got to work.