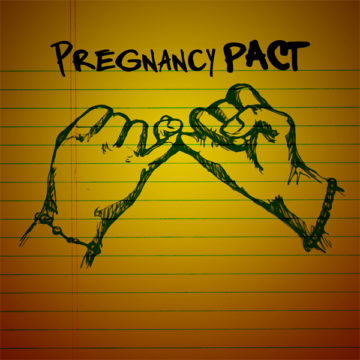 Pregnancy PactÂ is a pop-rock musical about a group of teens who make a pact to become single mothers together. 15-year-old Maddie is devoted to herÂ three bestÂ friends and they are to her. So when Brynn gets pregnant, theÂ friends all plan to haveÂ children, raising them together in a dream of aÂ perfect life. Â Their pact grows as other girls find out andÂ want in. The bubble finally bursts when their secret is revealed, leaving each of the girls to face the hardÂ realities ofÂ love, responsibilityÂ and growing up.

Pregnancy Pact was originally developed in the Dramatists Guild Fellows program, under the guidance of Lynn Ahrens and Stephen Flaherty. As the recipient of the Weston Playhouse’s 2011 New Musical Award, selections were performed in Weston, VT and recorded with Kurt Deutsch of Sh-K-Boom/Ghostlight Records. The score was showcased as part of Ars Nova’s Uncharted series in March 2011. Most recently, the show received a workshop in the 2011 Yale Institute for Music Theatre in New Haven, CT.

Full production at Weston Playhouse (VT) in 2012. Concert presentation at Feinstein’s/54 Below in 2014.