Home » Musicals » Come From Away 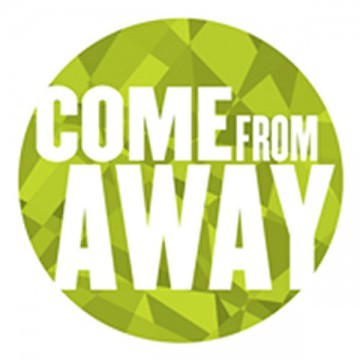 Come From AwayÂ tells the true story of when seven thousand people landed on the doorstep of Gander, Newfoundland… and the people of Gander “put the kettle on.” A rocking musical about when 38 planes from around the world were diverted to a small, Canadian community on September 11, 2001â€”doubling its population in an instant. While the world witnessed the worst acts of humankind, the stranded passengers had their faith in humanity restored by the spirited people who comforted those who had come from away.

Come From Away is a story of humanity set against the backdrop of tragedy. The committee was drawn by the power of the story of a little town caught up in a major world event. A terrific regional score drives this highly original and exciting new work.

In 2011, David Hein and Irene Sankoff received a Canada Council for the Arts grant to travel to Newfoundland for the tenth anniversary of September 11, 2001, where they met, interviewed, and were “screeched-in” with returning passengers, pilots and local townsfolk. With an additional grant from the Ontario Arts Council, they first workshopped Come From Away at the inaugural season of The Canadian Music Theatre Project (CMTP), presenting at Sheridan College and the Panasonic Theatre in Toronto. In January, 2013, they developed the show further at Goodspeed Musicals’ Festival of New Artists and again in March at CMTP/Sheridan.