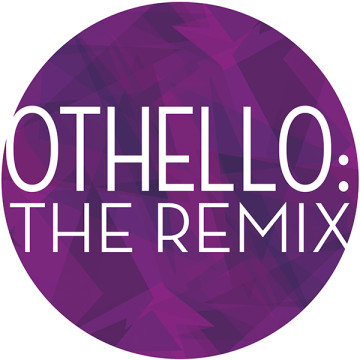 by The Q Brothers (GQ and JQ)
Developed with Rick Boynton

Voice of Desdemona is recorded.

This fresh take on Shakespeare’s tragedy is spun out and lyrically rewritten over original beats by The Q Brothers—America’s leading re-interpreters of Shakespeare through hip-hop. Whether you’re looking for a rockin’ night of rhythm and rhyme or a new way to think about Shakespeare, Othello: The Remix delivers an intense, high energy spin like no other.

Othello: The Remix is forging its own path in musical theatre, led by its creators The Q Brothers. With only four actors, Othello is updated and brought to life with a hip-hop beat in a way that respects the source material but isn’t afraid to take some parts and remix them.

Othello: The Remix was commissioned for the Globe to Globe Festival by Shakespeare’s Globe, Chicago Shakespeare Theater and Richard Jordan Productions. Since its world premiere on May 5, 2013 as part of the London 2012 Cultural, it has toured widely, captivating audiences at the Edinburgh Fringe Festival, Australia, Germany, South Korea, Poland, New Zealand, and United Arab Emirates. Over the years, it has garnered tremendous acclaim and honors, including Edinburgh’s Musical Theatre Matters Awards for Best New Musical Theatre Show and Best Lyrics, as well as a Joseph Jefferson Award for Best Ensemble. The show is a past recipient of a Writers Residency Grant from NAMT’s National Fund for New Musicals.