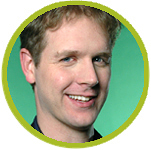 A guest blog entry from David Hein, writer of Come From Away to be presented at this year’s Festival of New Musicals.
I grew up listening to Newfoundland folk music – bands like Great Big Sea, Shanneyganock and The Navigators playing instruments like accordion, mandolin, bodhran, tin whistle and “ugly sticks.” They sang sea shanties with thirty verses that you couldn’t understand all the words to about drinking, shipwrecks, drinking, lost loves, drinking, loneliness and more drinking. In kitchen parties along the coast, people would dance until they fell down or drank until they fell down or a little of both. Raucous and rowdy, Newfoundland folk is passionate music and, like Newfoundland itself, it’s a looooong way away from the musical theatre of New York (which we also love – it’s just that, until Once, that kind of music wasn’t heard much in these here parts).
We first workshopped Come From Away at The Canadian Musical Theatre Project with a four piece band: (1) acoustic guitar, (2) fiddle/viola/cello, (3) accordion/mandolin/guitar and (4) bodhran/drums/mandolin/low whistle. We were trying to represent not only this amazing original style of music, but also to represent through music what happened in Newfoundland after 9/11 when so many passengers were stranded there – a fusion of many diverse cultures. So we not only needed to play Newfoundland folk, but ambitiously, we decided to also add a little Texan country, some African drums, Moldovan choral chanting, Hebrew and Hindu prayers and more…
But when we brought Come From Away to Goodspeed, we were told we could only use a piano – and that it would be played by our music director who was assigned to us – some guy named Dan Pardo. Honestly, we were

kind of dreading our crazy Celtic folk show being translated into formal classic music theatre arrangements, with pristine pronunciation, and coming out sounding like Gilbert and Sullivan (not that there’s anything wrong with G&S). But when we arrived, Dan invited us out to the Griswold Inn (the oldest pub in America). When he’s not working on shows like Showboat and Mame, Dan plays concertina at the Gris each Monday night – they sing sea shanties, drink a lot and make the crowd sing (and drink) along. After that, we knew our show was in good hands. 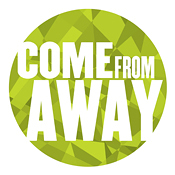 Fast forward to now: we’ve only got a 29-hour reading to teach all these styles of music and we’ve got more than just a piano, but far fewer instruments than we’d originally envisioned. We’re at CAP21 for our first rehearsals with a ridiculously talented cast who have performed in some of our favorite Broadway shows. Dan has updated our original orchestrations (written by the equally amazing Callum Morris) and they sound wonderful. Frankly, our cast could make anything sound wonderful – but we still only have a very short time to teach everything – and even though the cast seems to be taking it in, we really only get one or two passes…
On our third rehearsal, we meet the band. NAMT restricts the band size to 2-3 performers, so we have Erikka Walsh, who’s played violin in Oncesince its initial development; Eli Zoller, who plays guitar, mandolin, bass, banjo and drums; and Dan, back playing piano and concertina. It’s a rushed rehearsal – Erikka has to get back to Once and we’ve got to head to a NAMT writers meet-n-greet, so we don’t get to everything.
Today, we had our sitzprobe – bringing the band and cast together. This is the moment of truth… and it all works! Dan’s orchestrations sound beautiful underneath the twelve choral voices. Eli somehow turns his guitar into a guitar-drum and Erikka hits every note. And the cast is magic. Ruthie Ann Miles and Nick Choksi are singing in Hindi, Spencer Moses and Jason SweetTooth Williams are singing in Hebrew, and everyone is singing in Newfoundland-ese. By the last song, everyone’s clapping and stamping their feet and it feels like we’re in an East Coast pub singing sea shanties.
Sure there’s still some work to do, but we’ve still got some rehearsals – and it feels like all these disparate bits and pieces will come together. Which is kind of one of the themes of Come From Away: telling a story about all these different people from around the world coming together in a tiny community. And telling that story by playing music from around the world – and finding the common denominators that tie them together. Come From Away is a true story musical about a little town that shared everything it had with new friends from around the world – and we can’t wait to share this show with our new friends at NAMT.
Tagged: Come From Away Festival 2013