In addition to the Festival of New Musicals, NAMT held our annual Fall Conference for our members and invited guests last weekend.  Since it takes place in conjunction with the Festival, the Fall Conference typically focuses on new works.  This year we decided to take a more holistic approach, looking at the overall health and future of the art form and the industry. 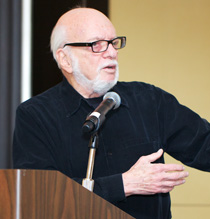 We couldn’t have asked for a better start than the keynote speech by legendary director and producer Harold Prince.  Hal spoke passionately about his long career and the state of the field today, with particular focus on what he sees as a lack of mentoring opportunities for young producers and artists, and a lack of singular “creative producers” in a world where making theatre has become prohibitively expensive and making a living as an artist seems next to impossible.  That sounds dour but it wasn’t!  I think the attendees were inspired by the challenge to support young artists and create work with passion – something at which most NAMT members already excel.
From there we heard from a wide variety of educators about how they are working to train exactly the next generation that Hal spoke about nurturing.  We spoke about young musical theatre writers who have never heard of Sondheim (!), who are coming to the field with stories to tell and all sorts of musical styles in their backgrounds.  Plus actors, directors and more, and how we’re preparing them to enter the industry with new works and classics alike.
The last panel of the day was a challenging one, addressing the issues of racial diversity (or lack thereof) in musical theatre.  This hour-long session could easily have been twice as long, as the issues ranged so widely, including color-blind casting (“I prefer non-traditional, color-specific casting,” said Ralph Remington of the NEA, meaning a conscious choice made to change a character’s race), diversity of stories being told, and audience outreach to different communities. It was a great discussion that barely scratched the surface, but challenged attendees to think about these issues and how we can serve the art, and our communities – both artistic and in the audience.
Day two began with an unexpected bonus: Ralph Remington from the NEA talked with us about changes at the NEA and the current state of federal funding for the arts.  As anyone following the news will have guessed, it wasn’t the best news we heard this day!  But it was a great opportunity for NAMT members to gain insight into the granting process and have a dialogue about the challenges they face and the goals of the NEA.
Segueing nicely, four NAMT members shared stories and case studies of how they’ve been able to keep costs down during the recession without sacrificing the quality their audiences expect.  Attendees came away with adaptable, scalable ideas they could use in their own theatres.
The next panel looked at the challenges of recording new shows for promotion or sale, especially regional productions.  Cast albums are essential to getting new shows “out there” to potential new fans and producers, but they’re expensive to make and rarely make much money back. Fortunately our panel included people who are passionate and committed to preserving new shows, including Sh-K-Boom Records founder Kurt Deutsch, and the Grammys’ Elizabeth Healy, who made sure we knew that any cast album can be submitted for a Grammy Award, not just Broadway shows, and that without submissions the category could be in danger.
Next up was a continuation of last year’s session on continued life for new works – the challenges of getting second productions and beyond.  A lot has changed in the last twenty years or so.  How does a new work enter the canon, especially if it doesn’t go through Broadway first?  There were no easy answers, but the NAMT members seem to be leading the charge to keep the new works pipeline going. 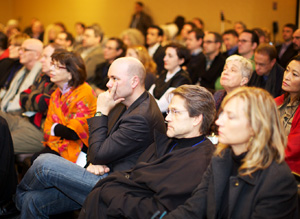 After lunch and some small group discussions, we came back together to end the conference with a session on new looks at classic works, and how NAMT member theatres are adapting classics to fit their spaces and budgets, and to appeal to new audiences, with the support of the licensers and estates.
It was a very inspiring and information-filled two days, only slightly hampered by unseasonal snow!  I personally always find our conferences very energizing, as I love seeing our members and hearing about all the great theatre happening around the country.  It’s encouraging to see members sharing ideas and resources, taking techniques that are scalable and adaptable to organizations of all different sizes.
NAMT conferences are open to members and invited guests only.  The next one will be held on March 22-24, 2012 in Seattle and will be about marketing. I hope to see you there!
Photos by David T. Cole
Tagged: audience development conferences economy fundraising member benefits