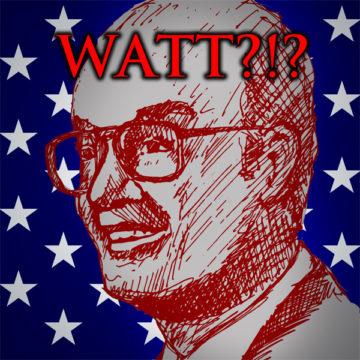 Watt?!?Â is a balls-out rock musical telling the heroic true story of James Watt, Ronald Reagan’s Secretary of the Interior, who opened millions of acres of federal land for exploitation, banned the Beach Boys from July 4th festivities, and was ultimately fired for referring to a five-person panel as â€œa black, two Jews, a woman and a cripple. â€

Much of Watt?!? was written during a one-week writers’ retreat in 2007 at the Barrington Stage Company in Pittsfield, MA, under the guidance of Julianne Boyd. BSC then staged a reading of the show, under the direction of Jonathan Bernstein, in spring 2008.

Workshop at Trinty Repertory Theatre (RI) in 2012. Developmental production at The Village Theatre (WA) in 2013.