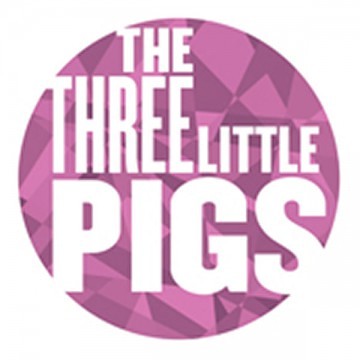 Take three little superstar Piglets, their devoted single-parent Mom, a misunderstood Big Bad Wolf and the award-winning tuneful wit of Stiles and Drewe and you’ve got the perfect “Great Big Little Broadway Show” for audiences of three years old and up. This very curly musical tail will huff, puff and blow you away!

The Three Little Pigs gives the classic fairy tale a new and modern sensibility that will leave NAMT audiences grinning from ear to ear. The committee was tickled pink by the thoroughly original, upbeat score and were captivated by the endlessly entertaining bovine brothers. A sure-fire family hit!

The Three Little Pigs was commissioned by the Singapore Repertory Theatre, specifically for their Little Company and forms the first in a “trilogy of trios” (along with Goldilocks and The Three Bears and The Three Billy Goats Gruff). It premiered for 70 sell-out performances at the DBS Arts Centre in Singapore in March 2012 (in English), and returned for a further four-week run at the same venue in July 2013 (in Mandarin). The show has also played at The Greenwich Theatre, London and will open at Emerald City Theatre, Chicago in January 2014.