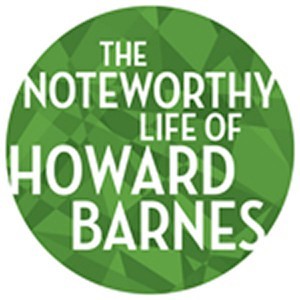 The Noteworthy Life Of Howard Barnes

Howard Barnes is a perfectly average, if emotionally repressed, man in his early thirties. That is, until the day that he wakes up to discover that his life has become a musical. Desperate to escape from the show, and get his normal life back, Howard teams up with Maggie, an aspiring actress who works in his office. Together, the two embark on a fantastical quest through the realm of musical theater. Along the way, Howard discovers that he must let go of the past and open himself up to the possibility of love. In doing so, he learns to embrace the music. Equal parts satire, romantic comedy, and love letter to the American musical, The Noteworthy Life of Howard Barnes is intended for people who love musical theater, and their spouses who hate it.

Pithy and clever, this show is both delightful and a bit daffy. This is a show for people who love musicals, and perhaps for those who love to hate musicals. It will make you laugh out loud while hitting close to home for everyone.