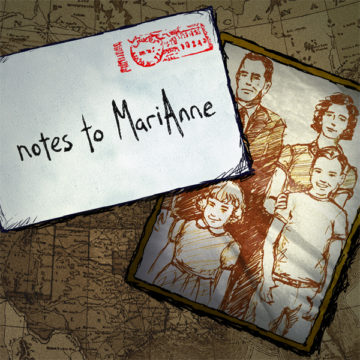 Sometimes we leave someone we love. At 12 years old, Johnny ran away from home, leaving behind his sister MariAnne — a regret he can’t shake. That was in 1952. Ten years later, the estranged pair are swept into a series of extraordinary events that will bring them to a pivotal reunionÂ  The set is sparse yet the story stretches from Brooklyn to Kansas. The cross-country journey rides a wave of American pop music, from early ’60s rock to ’30s saloon songs to contemporary beats and melody. A modern fairy tale,Â notes to MariAnneÂ explores the consequences of leaving those we love and finding new hope in the most unexpected places.

notes to MariAnne was seen in concert at Joe’s Pub and had several closed readings before 2007, when the show was welcomed to the O’Neill Center’s National Music Theatre Conference, where Rossmer & Lipton received the Holof Award for their lyrics.  In 2008, the show was seen at New York Stage and Film’s Martel Musicals series as part of the Powerhouse Theater season at Vassar.