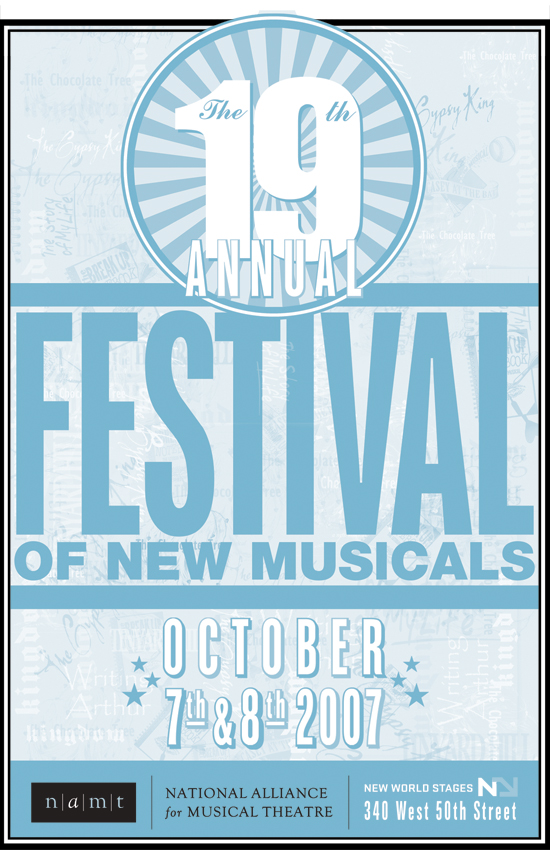 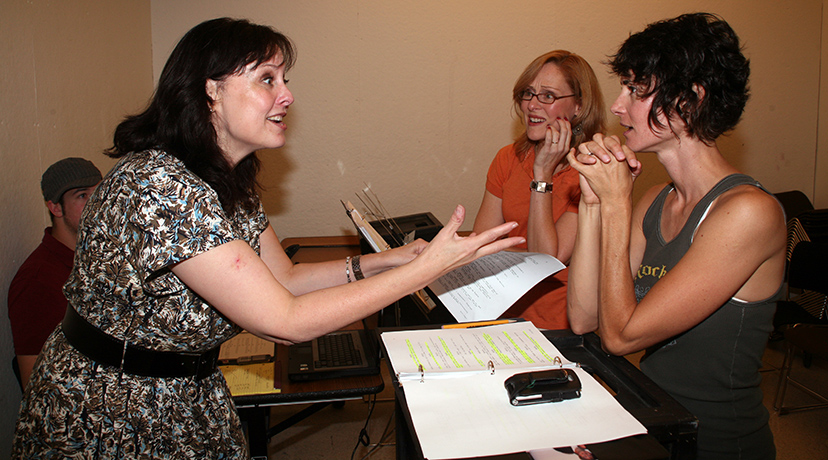 Break Up Notebook: The Lesbian Musical 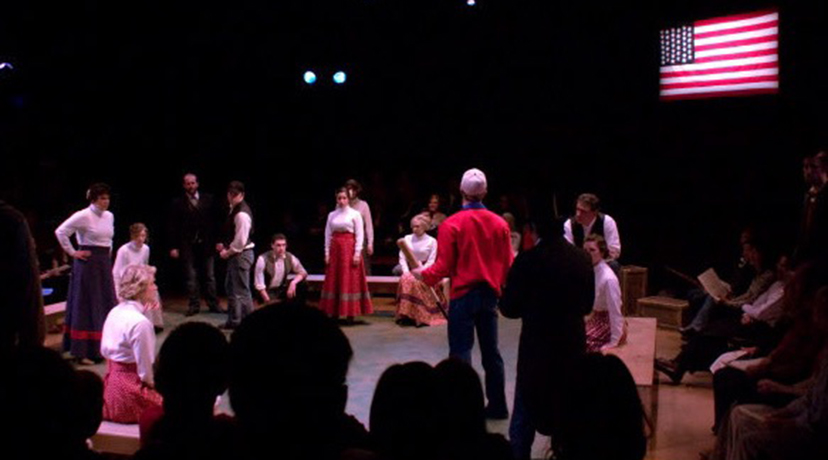 CASEY AT THE BAT at Brigham Young University 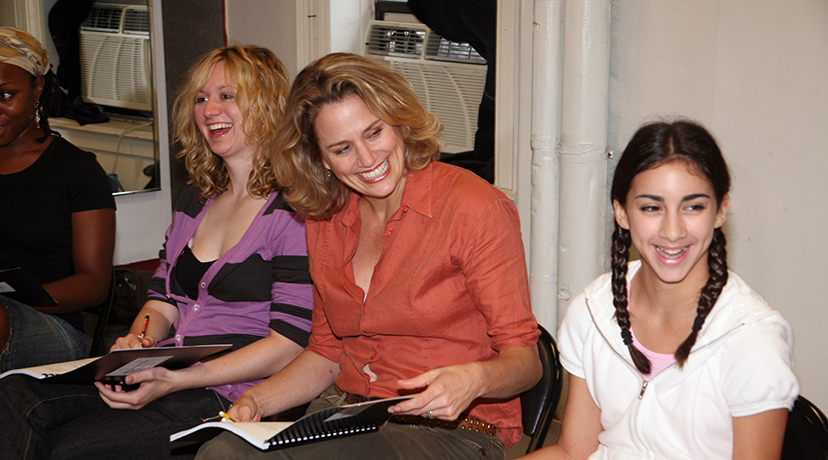 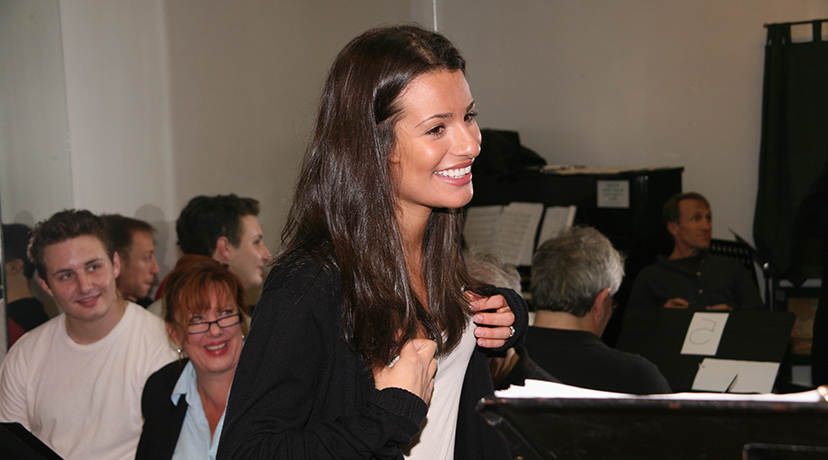 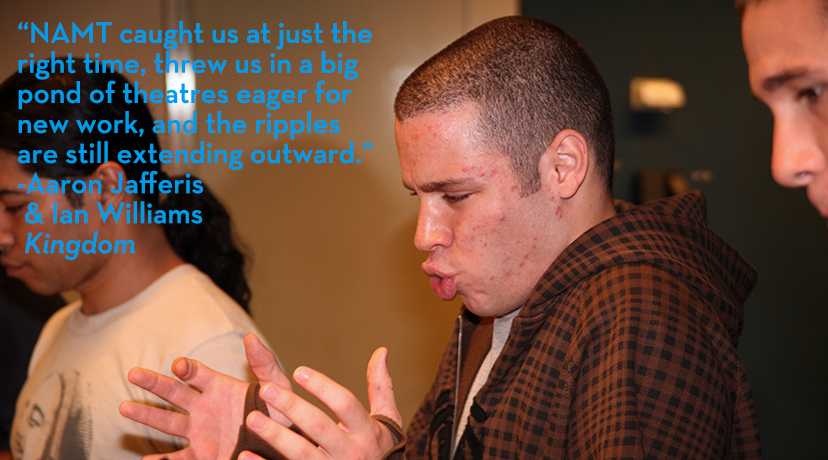 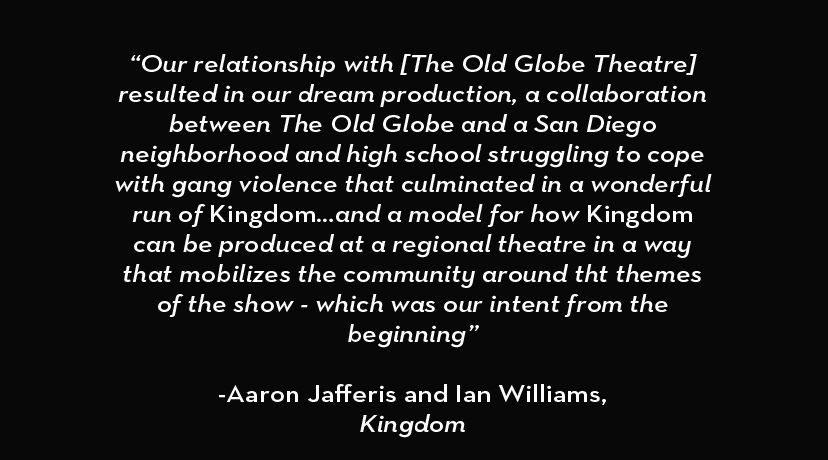 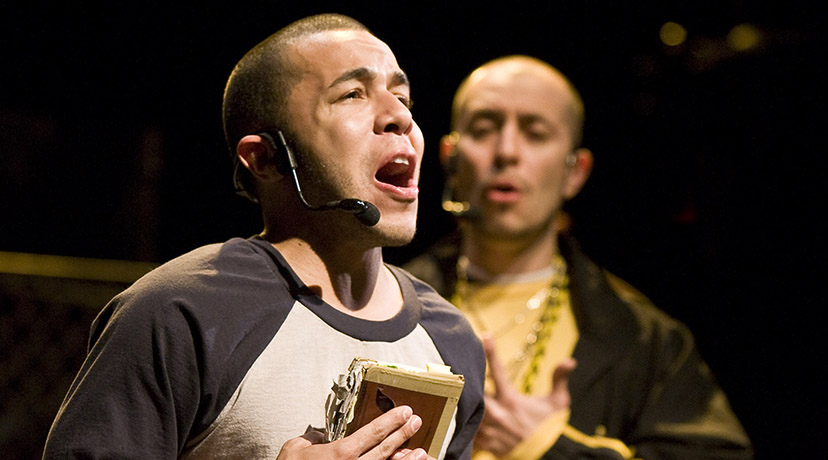 Cedric Leiba, Jr. and Gerardo Rodriguez in KINGDOM at the Old Globe Theatre 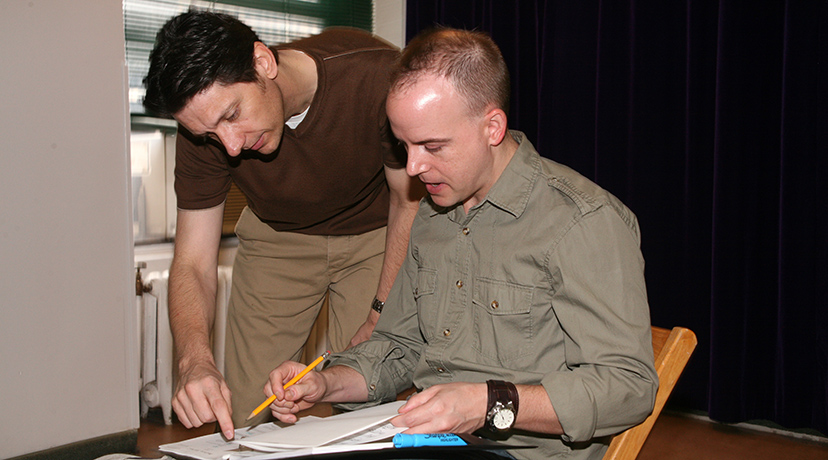 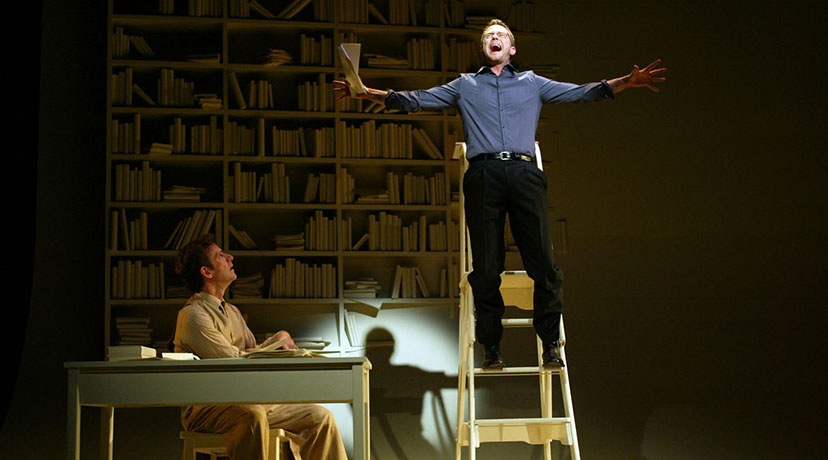 THE STORY OF MY LIFE at Goodspeed Musicals 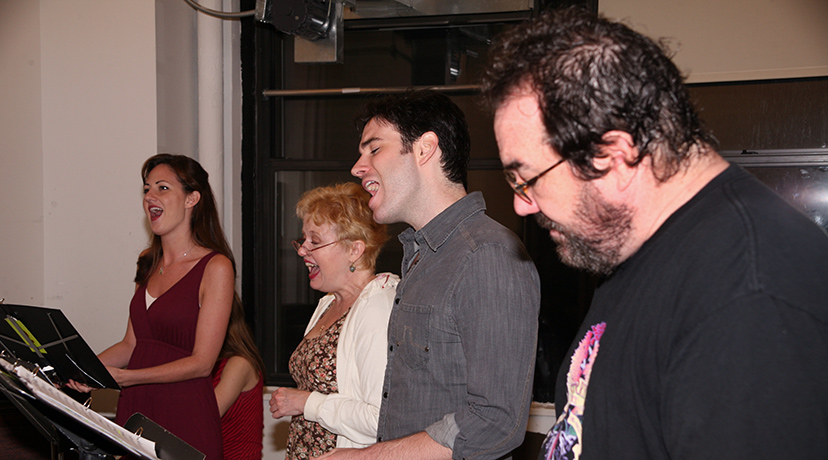 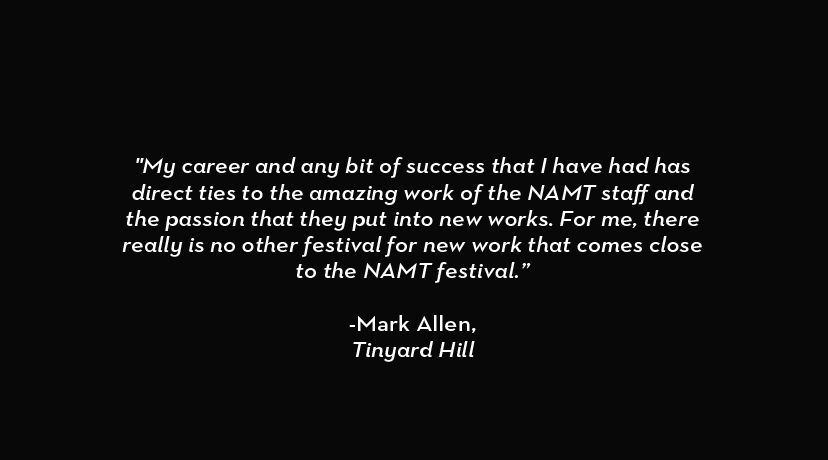 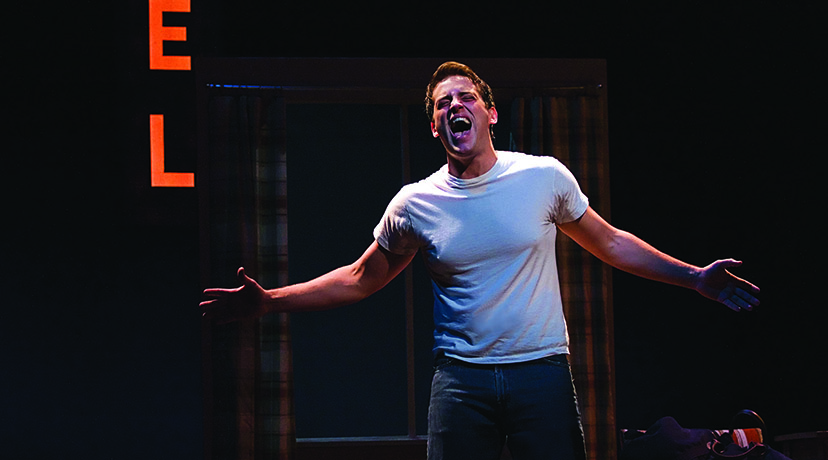 Chris Critelli in the world premiere of TINYARD HILL at TheatreWorks 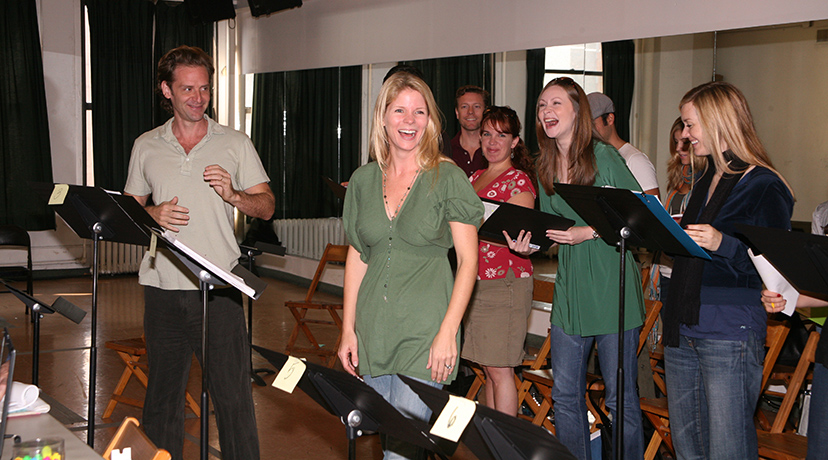 The Break Up Notebook: A Lesbian Musical

The Break Up Notebook: The Lesbian MusicalÂ examines a year in the life of the recently dumped Helen Hill.Â  With her family of friends by her side she encounters: two-stepping twelve-steppers, Paxil popping lawyers, dental dams, grrrl bands, hot girl on girl action, and maybeâ€¦just maybeâ€¦ the girl of her dreams.Â The Break Up Notebook: The Lesbian MusicalÂ features a book by television and screenwriter Patricia Cotter and music and lyrics by LA composer, Lori Scarlett.

More about The Break Up Notebook: A Lesbian Musical

Casey At The Bat

Based on the classic poem, and the book â€Casey On The Loose” by acclaimed sportswriter Frank Deford, Casey comes to bat for Mudville, U.S.A. in a big-hearted, small-town tale of humor, love, greed and the competitive spirit to learn that he can be a hero even when he strikes out. Bookwriter and lyricst Tom Child is a freelance writer of theatre, tv and film and has written dozens of tunes, and composer Gordon Goodwin is a Grammy and Emmy Award winning musician for his work on animation series and movie, â€œThe Incrediblesâ€ and is leader of the big band Big Phat Band.

More about Casey At The Bat

A remarkable young girl stricken with a grave illness uses herÂ rich fantasy world and indomitable spirit to bring the impossible to life, which takes her family and the audience on a powerful, transforming journey.Â The Chocolate Tree isÂ written by the team Marshall Pailet and A.D. Penedo (Loch NessÂ andÂ Where Itâ€™s AtÂ – ASCAP, New York International Fringe Festival).

More about The Chocolate Tree

Arthur Danby has finally found the perfect woman. Problem is, sheâ€™s a fictional character in his novel. When a very real woman steps into his life, his worlds collide. Will Arthur fall deeper into the world heâ€™s created or allow life to write itself?Â Writing ArthurÂ creator David A. Austin is a proud member of the BMI workshop, and has written book, music and lyrics for over twenty musicals. Mr. Austin has been commissioned by NAMT Members the Fifth Avenue Theatre and the Village Theatre, and received a commendation from the Antoine D’Exupery Foundation for his adaptation ofÂ The Little Prince.

Two penniless entertainers stumble into a small town and land smack dab in the middle of a plot to assassinate the King. When itâ€™s discovered that one of them looks exactly like the doomed monarch, things get sticky.Â The Gypsy KingÂ is a collaboration between award winning film and television writer and composer Randy Rogel and actor, director, choreographer and film writer Kirby Ward.

More about The Gypsy King

Inspired by the true stories of current and former Latin Kings,Â KingdomÂ chronicles the journey of two kids from the barrio who join the Kings in search of power and respect. When tragedy strikes, a power struggle tears the two friends apart â€“ with devastating results.Â KingdomÂ composer Ian Williams is a NYU Graduate Musical Theatre Writer, and book writer/lyricist Aaron Jafferis is known for his hip-hop poetry and plays.

The Story Of My Life

Cast
Will Chase and Jeffrey Kuhn

The Story of My LifeÂ is a two-character musical about Thomas, a writer, and Alvin â€“ lifelong friends, until life sent them in different directions. When suddenly faced with the task of writing Alvinâ€™s eulogy, Thomas digs through the cluttered collection of stories in his mind â€“ with Alvin as his guide â€“ to find a way to celebrate his friendâ€™s life and understand his untimely death.Â Composer and lyricist Neil Bartram is a recipient of a Dramatists Guild Jonathan Larson Fellowship and a 2005 Jonathan Larson Foundation Award, and book writer Brian Hill is currently the Associate Director for the Broadway-boundÂ The Little Mermaid.

More about The Story Of My Life

In South Georgia, 1964, a blacksmith and his son are desperate to keep the familyâ€™s two-hundred year old shop from becoming another â€œpioneerâ€ tourist joke.Â  But as the Vietnam Conflict escalates and a summer romance blossoms, the world grows too large to ignore in this moving story about big love and small-town dreams.Â Tinyard HillÂ has a score by published theatre and film composer Mark Allen (2005 ASCAP Max Dreyfus Award for Excellence in Musical Theatre Writing) and book and lyrics by Thomas M. Newman (Oâ€™Neill Center Theatre Fellow and NYU Musical Theatre Graduate Program Writer).

BEAUTIFUL CRIMINALS by AnnMarie Milazzo and Leigh Silverman
THE BLONDE STREAK by Dan Lipton and David Rossmer
BROTHER WOLF by Preston Lane and Laurelyn Dossett
EMILY by Richard Ouzounian and Marek Norman
HOW CAN YOU RUN WITH A SHELL ON YOUR BACK? By Michael Mahler and Alan Schmuckler
LUCKY LINDY by Barry Harman and Keith Herrmann
SAINT HEAVEN by Martin Casella, Keith Gordon and Steve Lyons
SECONDHAND LIONS by Rupert Holmes, Alan Zachary and Michael Weiner

Lyrics & Music, The Story Of My Life

Neil Bartram (Composer and Lyricist) BROADWAY: The Story of My Life (Drama Desk Award nominations for outstanding music, lyrics, and new musical). REGIONAL: Signature Theatre: Spin; Chicago Shakespeare Theater: The Adventures of Pinocchio; Goodspeed Musicals: The Theory of Relativity, The Story of My Life, Not Wanted on the Voyage; AMTP: Not Wanted on the Voyage; CMTP: The Theory of Relativity; The Stratford Festival: Not Wanted on the Voyage, Clara’s Piano; Canadian Stage: The Story of My Life. UPCOMING: Something Wicked This Way Comes, Bedknobs and Broomsticks. AWARDS: Jonathan Larson Award, Dora Award, Dramatists Guild Fellowship. OTHER: Dramatists Guild and ASCAP member, alumnus of the BMI Lehman Engel Music Theatre Workshop. Published by Warner/Chappell.

Book & Lyrics, Casey At The Bat

Book, The Break Up Notebook: A Lesbian Musical

Music, Casey At The Bat

Book, The Story Of My Life

Lyrics & Music, The Break Up Notebook: A Lesbian Musical

Lori Scarlett is an award-winning composer/lyricist (Ovation, Los Angeles Drama Critics Circle, and Backstage West Garland Awards for THE BREAKUP NOTEBOOK, book by Patricia Cotter.) Her work has been performed on both coasts and around the country. Lori is the composer/lyricist of FUCKING HIPSTERS (book by Keythe Farley, co-composed with John Ballinger), which premiered at the Signature Theater in New York City as a 2011 NYMF Next Link Selection. Her critically acclaimed first musical SNEAUX! THE SIN-SATIONAL GOTHIC FIGURESKATING MUSICAL was directed by Andy Fickman and ran for seven months at L.A.’s Matrix Theater. Lori, along with co-composer David Manning, was recently nominated for a 2013 Los Angeles Drama Critics’ Circle Award for Best Score for JUSTIN LOVE (Book by Patricia Cotter and David Elzer) following a much-lauded run at the Celebration Theater.

Mr. Ward has written for TV, stage and film. He has headlined with symphonies all over the world and created the role of Bobby Child in London’s West End production of Crazy For You in 1993. He’s a director and choreographer of musicals such as She Loves Me,Thoroughly Modern Millie and Big River all across the United States. He staged Debbie Reynolds’ and Donald O’Connor’s nightclub acts, and was instrumental in the translation and direction of both the Chinese and Korean productions of Crazy For You in Seoul and Beijing. He was co-creator of the musical The Gypsy King, which was presented at the Village Theatre in 2010. His film, Down in the Mouth, received the Best Short Film award at the Kent Film Festival in Connecticut, and was an “Official Selection” at five other national and international film festivals. 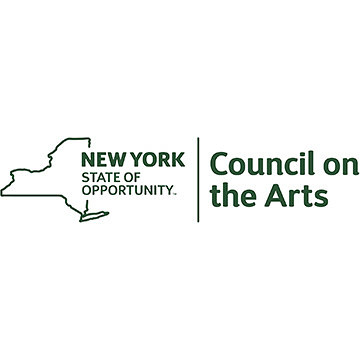